We were riding into Harvest 2020 ready for war.  In the building we were throwing words around we never thought possible.  "Oakville! Rutherford! Veeder! GIII!!! LFG!!!" It was all starting to happen.  And it was sort of a farewell tour in our production facility.  We had found a new home to start building in Napa.

We were riding high, feeling good.  Until August 17, 2020.  We all remember waking up in the middle of the night to the sound of thunder, looking outside and watching the most intense lightning storm.  And in true 2020 fashion, a new wave of shit was thrown at humanity in the shape of fire. Everywhere.

We were lucky enough to have picked our Sauvignon Blanc from Saint Helena before the fires took place, and we worked quickly with Brenae Royale at Monte Rosso to get our Zin off quickly.  The harvest was spent driving all over the place, pulling samples, sending them to labs all over, bucket ferments, waiting on results.  Watching fruit over ripen, wondering if its smoke tainted.  Wanting to make wine but being told no by growers, and in some cases pulling the plug as we are setting up to pick.

It ended with Craig and I finding a small lot of Pinot Noir down in Santa Rita Hills the Saturday the Glass Fire broke out.  We went down, dropped bins, picked them up at 3 am, drove back to Livermore to process and then loaded 2 trucks for a 10 ton pick in Saint Helena, which we had received results with only moderate smoke taint indicators. We were going to take a chance.

As we were driving into Napa, the Glass Fire had jumped from Vaca Side to Spring Mountain, and it was erupting as we were pulling into town with two massive streams of smoke way high in the sky, but relatively clear where we were. I am calling Craig, confident and excited, "We're gonna do this!"  A large ploom about a mile as the bird flies pops off, and like someone hit the lightswitch, the pressure changed and smoke and ash started raining on us.  The crew was getting ready to start, but within seconds we couldn't see 10 feet in front of ourselves.

We sent the crew home, loaded our trucks back up and left Saint Helena.  We didn't know this at the time but Calistoga and some of St Helena was being evacuated.  I remember sitting in traffic, smoke all around, and haven't slept in two days thinking, "are we the only idiots leaving a wine growing region that doesn't typically deal with fires and moving to Napa?" 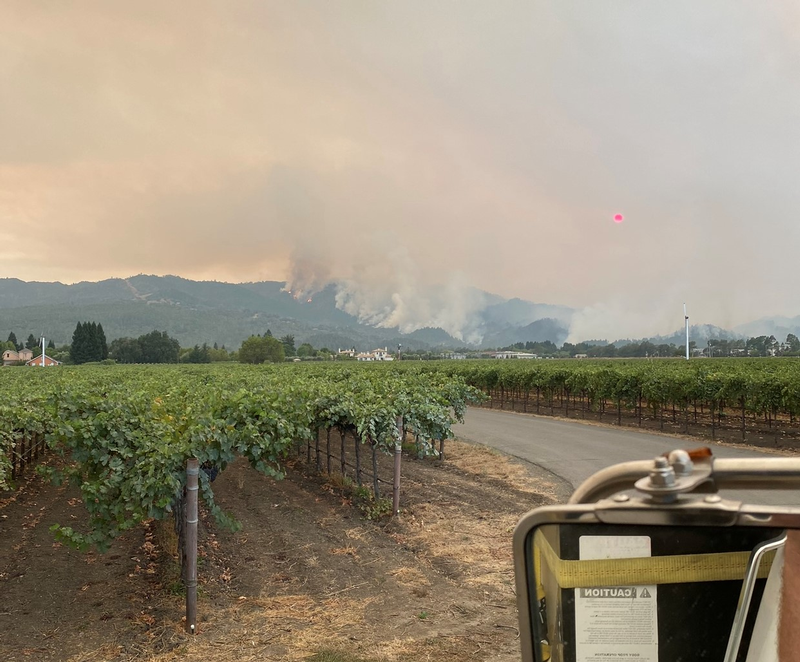